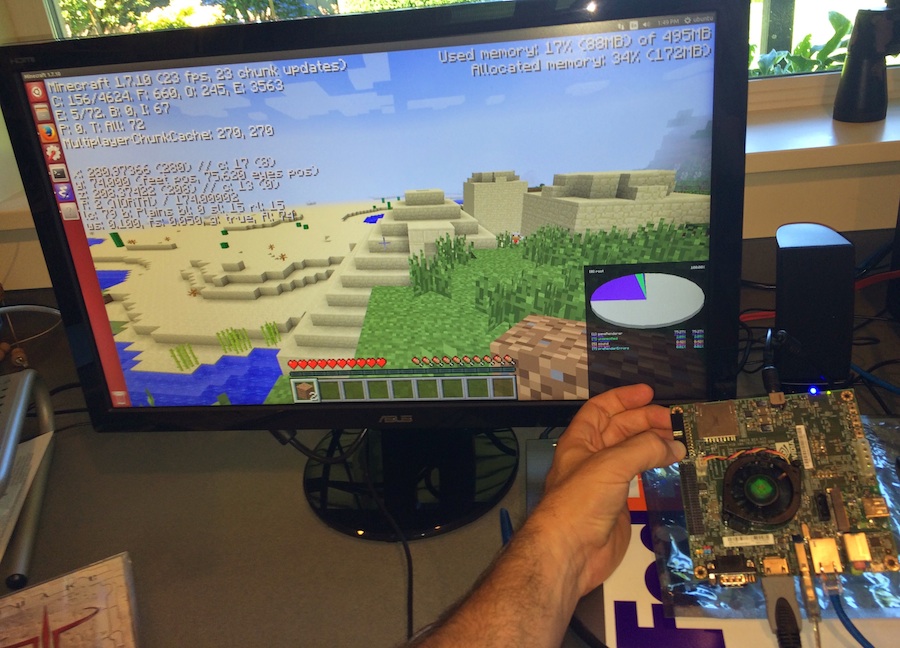 Call me crazy, but with an NVIDIA Jetson TK1 in my hands, the first thing I wanted to try running was Minecraft. The real Minecraft, not the "Pocket Edition" Minecraft that normally runs on ARM processors. It took me a few days to figure out how to make it happen, but I've now got it running at a very playable 25-30Hz at 1920x1080. Hopefully the instructions below can get it working for you, too.

Just to be clear, you will need to have purchased a Minecraft license to get this running. Also, this is not a simple hack. Please don't attempt this unless you have some intermediate linux knowledge and understand the commands you are running.

First, Minecraft requires Java. I found you must use Oracle's Java for reasonable performance--it is 10x faster than OpenJDK Java (2-3fps vs 25-30fps). Maybe OpenJDK will see this and use it to tune their implementation.

Following these webupd8 instructions to install Java worked perfectly for me:

Then, make sure to update your JAVA_HOME directory. I put this into my .bashrc:

Next, Minecraft requires LWJGL. Compiling it requires only one small edit to the code and I was grateful to follow in the footsteps of this developer's instructions.

These are the packages I needed installed: (Oct 2014 update--added libxt-dev)

Get the LWJGL source from Github:

Before we compile, there is a bug in the LWJGL linux build that we need to fix first. In the file platform_build/linux_ant/build.xml you need to change this line (near the top):

to be this instead: (just changing the i386 to arm)

These are some compilation flags that ant passes to gcc when compiling. There isn't any $JAVA_HOME/lib/i386 directory on Jetson. Instead the compiler needs to look in $JAVA_HOME/lib/arm. We'll just fix this locally while LWJGL works on Issue 74.

Finally, due to a different "apt" binary in both the java sdk and in /usr/bin, there needs to be something done for your path while you build with ant. The following worked for me.

The above should build a libs/linux/liblwjgl.so native shared library.

For a while, I thought this would be all I needed for LWJGL and I was confused as to why sound did not work. But, LWJGL doesn't actually build libopenal.so, it just packages up an x86 shared library. See https://github.com/LWJGL/lwjgl/tree/master/libs/linux

So, we must build OpenAL. For this, I needed to get cmake.

Downloading the source and building was no problem at all:

This should create a build/libopenal.so.1.15.1 native shared library.

Now, find a convenient location to store your LWJGL and OpenAL libraries. Copy the libraries you've created to that location. Note that libopenal.so changes names to drop the version number.

For example: (adjust paths as needed)

Find the latest Linux Minecraft.jar from https://minecraft.net/download and save that in the ~/Minecraft directory. Run this via java -jar Minecraft.jar and try to start a game from the launcher window. It should download all the files necessary into the ~/.minecraft directory in order to run the latest version of Minecraft. But, it will complain when it can't find the arm native libraries. Just quit after you try to launch a game and it fails.

During this process you should see a lot of output to your terminal. One piece is the java commandline it uses to start the game from the launcher. I'm sure this commandline will change in the future, so make note of this and if you are running a version of Minecraft different than 1.7.10, you will need to adjust.

I've created a gist here that has the commandline that I'm using. (Oct 2014 update--added Version 1.8 support)

Basically, all I did was change the -Djava.library.path to point to our native libraries and add the last part of the commandline starting with --username. This last bit is not listed in the terminal output. These are additional parameters that I only found via a google search. Again, I'm sure these options will change going forward. As versions change, perhaps we can work together to maintain these commandlines via the gist link above. Who knows, perhaps Mojang will see this and decide to include arm native libs--wouldn't that be great?

Copy the commandline to ~/Minecraft/run.sh and chmod +x run.sh. Running that file should allow Minecraft to find the native files and run on your TK1.